Do you think The Great Pyramid of Giza was originally built as a sarcophagus– The ancient tomb of Cheops (Khufu) attempting to circumvent death? 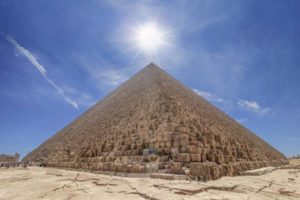 Just look at the majesty of the thing. The absolute perfection of its construction, its inexplicable interior chambers, the repeating patterns of earth, our galaxy, and the universe built into every aspect of the remaining structure.

To think there was ever an Egyptologist that looked at this marvel and said, “Big ass grave marker. Yup, that’s what it is.” I mean, it’s absolutely ridiculous.

What the hell is the Pyramid(s) at Giza? What a fantastic brain fuck. It feels so good to let loose the teachings of static morons and begin to contemplate paleoancient physics and the lost civilization(s) of our planet.

A physics that is well above our current understanding. A science purposely distorted by modern day powers to keep us in the dark. A secret knowledge that can be used to harness the power of our planet through resonate frequencies, solar magnetic ley lines and galactic gravitational forces.

The unified theory of our condition made manifest in a… weapon.

The sobering conclusion is right in your face. Where are the missing trillions? Most likely being funneled into some horrible death-ray project not dissimilar to The Giza Death Star.

What will remain after the cataclysmic ending of our epoch? The very same DOD installations that will destroy our future.

Have a nice day.

A fantastic read for a fantastic time. The Giza Death Star by Joseph P. Farrell.

Some of my highlights:

“And to know the science of music is nothing else than this – to know how all things are ordered, and how God’s design has assigned each its place; for the ordered skill in which each and all… are wrought together into a single whole yields a divinely musical harmony…”

“An Archaeology of Mass Destruction”

“Atlantis is the missing piece in the puzzle of WWII, it is the beginning and ending of the war.”

“the traditions relating to these monuments are unanimous in claiming that they are relics of a former elemental science, founded upon principles of which we are now ignorant.”

“Finally, we will explore the evidence that suggests that certain governments and secret societies are actively and secretly pursuing the reconstruction of the science and technology that made the Giza Death Star possible.”

“Once again, the basic historiographical presupposition underlying this method is that there was an ancient Very High Civilization of such technical and scientific sophistication that it surpassed even contemporary civilization in those respects…”

“for once the observer was left out of the mathematical model, God and Space appeared to be the same entity”

“As will be seen subsequently, the Great Pyramid was designed not only as a crystal and a mirror, but employed precisely such a plasma, drawing upon the energy of the sun, the solar system, and galaxy itself, as well as upon the energy that propels the sun: thermonuclear fusion.”

“as in the Hermetica, the ‘gibberish’ could be the apparent result of a less scientifically sophisticated legacy civilization trying to preserve and understand the achievements and physics of a more sophisticated antecedent.”

“In theoretical physics, simply being brilliant is not enough. One must also be able to generate new ideas, some of them bizarre, which are essential to the process of scientific discovery.”

“General Relativity does not explain how a large mass warps space; it only asserts that it does.”

“Hence, if we do not want to introduce new laws of nature, there are only two energy sources available: gravitation and annihilation.”

“and, since HAARP broadcasts within the frequency of the human brain, behavior modification.”

“if one measures the perimeter of the base of the Pyramid and divides it by twice the height, one will get a result approximating the value of PI to five decimal places.”

“at exactly noon during the spring equinox, due to the precise angles of its faces, it casts no shadow whatsoever.”

“there is so much stone mass in the pyramid that the interior temperature is constant and equals the average temperature of the earth, 68 degrees Fahrenheit.”

“The average height of land above sea level is approximately 5449 inches, which is also the Pyramid’s height.”

“Dunn points out that the design of the inner chambers and passageways of the Great Pyramid seem to connote some purely functional purpose having little to do with the death-resurrection-Osiris mythology of ancient Egypt.”

“The message it was intended to convey after its destruction was a moral one, not a scientific or prophetic one.”

“Military projects, however, are well-known for both size and expense, and human nature being what it is, I see no reason why the same should not have been true in ancient times.”